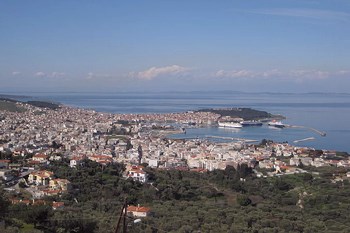 The Greek island of Lesvos (Lesbos) is located northeast of the Aegean Sea, and has approximately 110,000 inhabitants. The island is located near the coast of Turkey.Lesvos is a mountainous, lush and green island, and the highest peaks are Lepetymnis and Olympos – both of which measures 967 m

The island’s main industries are tourism, trade and service.

On Lesvos are beautiful scenery with picturesque coves and inviting sandy beaches, and a desire to experience the “real” Greece, visitors can head to one of the traditional villages of the island.

The capital of Lesbos called Mytilene (Mytilini), located on the southeast coast. The city has about 35,000 inhabitants and is the island’s administrative center. From the port of Mytilene ferries to such  Athens, Thessaloniki and Rhodes.

Some popular attractions include Mytilini the fortress in 1384 and an archaeological museum.

Lesvos also has many castle ruins, churches and monasteries – including Limona Monastery from 1523.

Other popular seaside towns on Lesvos is Petra, Plomari, Molyvos and Erosos.