Compare prices and find cheap car hire in Sardinia from well-known and local car hire companies. Insurances and unlimited mileage are included. Save up to 70% on car rental in Sardinia through us. 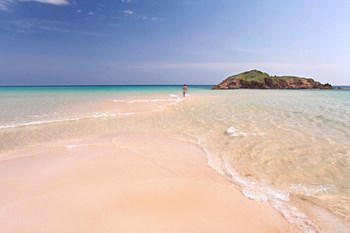 The island is famous for its warm Mediterranean climate, its beautiful beaches and excellent diving opportunities – with both colourful fish and ancient Roman shipwrecks. Sardinia has great tourism, and the beautiful scenery with tropical vegetation, the pure turquoise blue sea and the many white bathing beaches are probably the biggest drawcard.

The landscape of the island consists of plains, hills and mountains – and the highest peak “Punta la Marmora” measures 1834 meters above sea level.

The capital of Sardinia is called Cagliari and is located on the island’s southeast coast. The town has 165,000 inhabitants (2010), and from the port there are ferry links to, among others, Tunisia and Sicily. Popular tourist attractions in Cagliari include the fortress, theNational Archaeological Museum, a Roman amphitheatre and a beautiful botanical garden.

Other major towns on the island include Sassari, Quartu Sant’ Elena, Olbia and Alghero. Famous tourist resorts in Sardinia include the Costa Esmeralda on the north coast, Alghero on the north-west coast and Bosa on the west coast.

Beautiful scenery with tropical vegetation, the pure turquoise blue sea and white beaches draws many tourists to the island.

Sardinia has many beautiful small towns to show off, lovely beaches, and several unique sights. To get from place to place, you are almost dependent on having your own vehicle, as the island is quite large. We’ve picked out some of the most popular driving outs. Before planning your trip, we recommend that you also look at the map. Along the way you will almost certainly overtake several places worth a visit, and perhaps one of the many archaeological excavations you will find in Sardinia.

About distances and driving time 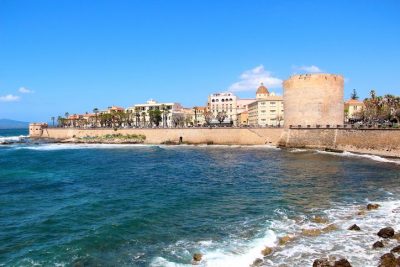 Alghero is surrounded by an impressive fortification.

In Alghero, many of the inhabitants speak Catalan, as they did in the Catalan part of Spain several hundred years ago. The reason is that the Spanish king Aragon ruled in this area of Sardinia in the 15th century and Alghero was a kind of Spanish colony. The language is partly preserved and the same applies to some other traditions that originate in Spain. The city is very beautiful, surrounded by an impressive fortification from earlier times and with picturesque houses in the city center. There are also many other sights in Alghero, including a 14th-century cathedral,small and beautiful churches, archaeological museum,and more. The food served at the many good restaurants is also worth mentioning. Here you get delicious dishes of especially seafood, prepared in a traditional way, with a touch of Spain in it. 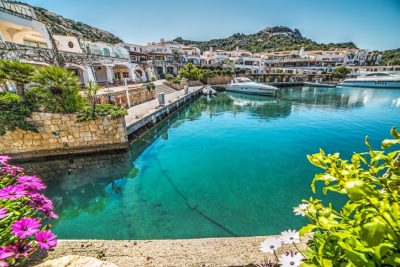 The rich people anchor their enormous yachts in Porto Cervo.

If you are on the north side of the island, stop by Porto Cervo. This is originally an old fishing village, which is now taken over by celebrities and rich people. Among other things, Italy’s former prime minister has a palace of a holiday home, where he holds much-discussed and contentious companies that the newspapers happily write about. The rich people anchor their enormous yachts in the bay, shop in Porto Cervo’s exclusive business and have dinner at the many good restaurants in the city. There are, of course, golf courses in the area and a number of very beautiful beaches. Although there are occasionally affordable accommodation in this resort town, Porto Cervo is known for having some of the most expensive hotels in the world. One of those, Hotel Cala di Volpe, has many seen in the James Bond film “The Spy Who Loved Me”. 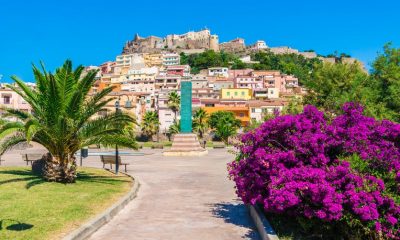 Sassari is known for its gorgeous settlement in pastel colours, where the houses stretch up against a cliff facing the sea.

If you are choosing one of the small fishing villages in Sardinia, Castelsardo should be included in the assessment. It is located on the north coast of the island, not far from the town of Sassari. Castelsardo is best known for its lovely buildings in pastel colours, where the houses stretch up against a cliff facing the sea. At the top there is a fortress believed to have been built in the early 12th century. Besides a quiet and comfortable atmosphere, and many good eateries in the small town, you will find a number of other sights there. Among other things, you can see ruins of buildings left behind from nuragher culture, a people who lived in Sardinia over 3,000 years ago. In the city you will also find a couple of small palaces,several beautiful churches, and some exciting museums.

La Maddalena is the name of the largest town on the island that has the same name. The island again belongs to the archipelago of Arcipelago di La Maddalena, located in the Bonifacio Strait in northeastern Sardinia. Here you will find a lovely natural area,pleasant villages, many great beaches and a relaxed atmosphere. There have been people on the seven islands for thousands of years and its inhabitants have included famous names such as Napoleon Bonaparte and Giuseppe Garibaldi. Garibaldi’s house is located on the neighboring island of La Maddalena, and it is possible to both walk and drive there. The house is today a museum and one of La Maddalena’s main attractions. It can also see a good deal of fortifications on the island that remain from the 18th century. To get to La Maddalena, drive to Palau and catch a car ferry from there. With a car rental, you can visit both the main island and the neighbouring island of Caprera. If you also want to see one of the other seven islands,you have to leave the car and jump on board one of the small boats that depart from the city. 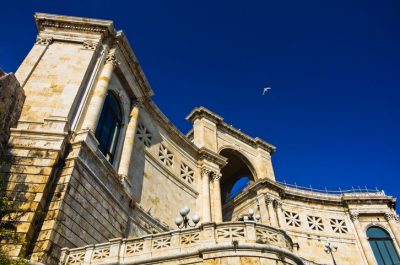 Bastione di Saint-Remy with the Umberto terrace, where you get unbeatable views of the city and the sea outside.

There is a lot to experience in Cagliari, Sardinia’s largest city. Many of the highlights can be found in the Castello district, the old town and the fortress. Here you will find, among other things, a museum complex located in the citadel of the fortress, i.e. the innermost part of the fortress. Several of the museums are gaining international recognition, especially the Museum of Archaeology, the Ethnographic Museum, and the National Gallery. In the old town there are also several small churches, a cathedral, an old town hall, several small palaces,theatre, wells, ornate gates, and more. The fortification itself, however, is what perhaps impresses most. Highlights include the elephant tower built in 1307– the 1305 St Pancras Tower, and bastione di Saint-Remy with the Umberto terrace– where you get unbeatable views of the city and the sea outside.

In the cities of Sardinia, parking in the streets is usually required every day except Sunday and public holidays. You pay at parking machines or by purchasing a parking permit in tobacco kiosks and the like. In the cities are marked taxed parking spaces with blue line. Yellow line is reserved for people with reduced mobility (must have their own permission). If it is free to park, this will normally be marked with white lines. Many beaches and sights have their own parking areas. On some of these, it is free to park, while elsewhere you will have to pay a parking fee, usually with cash.

Please note that in Alghero, Cagliari, Sassari and some of the smaller towns, there are so-called ZTL zones in parts of the city centre. That is, the area is car-freeand you will be fined if you drive there without permission.

Generally speaking, it is easy and comfortable to drive a rental car in Sardinia. Traffic is less aggressive than otherwise in the country, but you should still drive carefully and attentively. Many of the roads are winding– especially the small roads on the coast. From Cagliari in the south, to Porto Torres north of Sassari, there is a two-lane motorway across the entire stretch. There are stretches of two-lane motorway between Olbia and Alghero, as well as the entrances to these two towns and Cagliari, among others. In less congested areas, the quality of the roads may vary.

Traffic is less aggressive in Sicily than otherwise in the country, but you should still drive carefully and attentively.

There are three airports in Sardinia, and all three handle both international and domestic traffic from the rest of Italy. The island is large, and which airport you use therefore has a lot to say in terms of where to stay. 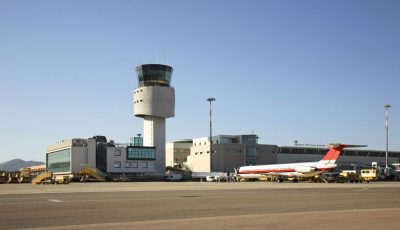 Olbia Costa Smeralda Airport is the best choice if you are going on holiday in the northwestern part of Sardinia.

The airport just outside Olbia is the best choice if you are going on holiday in the northwestern part of Sardinia. From here it is a relatively short distance to The Maddalena Archipelago, and to resort towns such as Porto Rotondo, Porto Cervo, Palau, Santa Teresa Gallura and Golfo Aranci.

Olbia airport is about 50 metres outside the terminal building. All car rental companies have their desks gathered there. The rental cars are parked nearby and no transport is needed. As of today you will find almost 20 companies offering car hire at the airport in Olbia. This includes international players such as Hertz, Europcar, Goldcar, Avis and Sixt, as well as Italian companies such as SicilyByCar, Maggiore and Ruvoli Rent a Car. 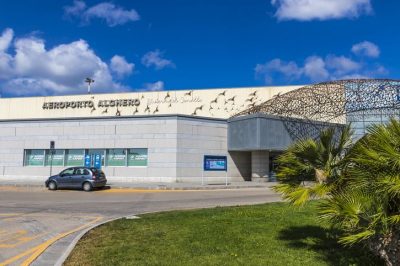 The car hire companies at the airport in Alghero are gathered outside the arrivals hall of the terminal building.

If you are going on holiday on the island’s north-west side, the airport outside Alghero is the best choice. In addition to the beautiful town of Alghero, you can be found within easy reach of places such as Sassari, Castelsardo, Stintino, Porto Torres and Bosa.

All car hire companies at alghero airport are gathered outside the arrivals hall of the terminal building. As of today, this applies to around 20 companies, including the most famous international players such as Avis, Budget, Hertz, Europacar, National, Alamo and Sixt. In addition to these, there are also many Italian companies to choose from. Rental cars are parked in the immediate vicinity of a separate reserved area. 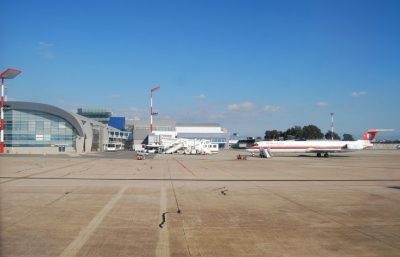 In total there are 20 actors offering car rental at the airport in Cagliari.

The airport outside Cagliari is the best choice if you are going on holiday in the south of Sardinia. It is located about 7 kilometers outside the city center. The shortest distance is to places like Pula, Porto Pinetto, Costa Rei, Porto Corallo, Oristano, Sant’ Antioco and Carloforte.

All the car hire companies are here gathered in the area at the front of the terminal building. In total there are 20 actors offering car rental at the airport in Cagliari. These include well-known companies such as Sixt, Avis, Hertz, Europcar and Goldcar, as well as a number of Italian companies such as Maggiore, Sardinya Rent a Car, Ruvioli and Dinamica Rent.