Compare prices and find cheap car hire on Tenerife from well-known and local car hire companies. Insurances and unlimited mileage are included. Save up to 70% on car rental in Tenerife through us.

Tenerife is the largest of the Canary Islands, and also the one with the highest number of inhabitants. As on the other islands of the Makaronesia archipelago, Tenerife was first inhabited by the indigenous Los Guanches, a people who came across the sea from North Africa. After the conquests of both Romans and Moors, the Spanish conquistador took over the dominion at the beginning of the 15th century.

Today, Tenerife is one of Spain’s largest tourist destinations and the island welcomes over 5 million visitors each year. This is also the island’s main industry, followed by agriculture and fishing. The climate in Tenerife makes it especially beneficial to grow bananas, corn, onions, tomatoes, grapes and tobacco here.

In the Canary Islands there is a pleasant temperatures all year round, making the archipelago a popular tourist destination both in winter and in summer. Most people travel to one of the many and typical resorts, but in Tenerife you will also find relatively large cities, including Santa Cruz de Tenerife (188,000 inhabitants) and San Cristobal de La Laguna (129,000 inhabitants). There are also many pleasant and small fishing villages on the island that are popular to visit.

Tenerife welcomes over 5 million visitors each year, which is also the island’s main industry,

The resorts and larger cities usually have good shopping opportunities, and a fairly lively restaurant and nightlife offer. Many of the best nightclubs and bars can be found at Playa de las Américas, in Puerto de la Cruz, in Los Cristianos, and in Costa Adeje, as well as in the largest cities. The food in the restaurants is typically Spanish, but preferably with a local twist. Fresh and fine seafood is served everywhere on the island.

The main sights of Tenerife include many monuments, such as the Cathedral of San Cristobal de La Laguna, the fortress in the village of San Andrés, and the Torres de Santa Cruz which is Spain’s tallest skyscraper. There are also several exciting archaeological excavations on the island.

There are several beautiful natural areas in Tenerife, and almost half of the island’s landscape is protected and declared a national park.

Many of the best nightclubs and bars can be found at Playa de las Américas.

Although Tenerife is a fairly small island, having a rental car here is a clear advantage. Those who just stay close to the hotel and frequent the same beach, miss out on a lot of exciting things. The island has many lovely small fishing villages that should be visited, and also offers unique nature experiences. Below are some suggestions for the most popular rides.

Distances and driving time in Tenerife

In this guide we do not include distances and driving time for the proposed excursions. The distances will depend on where you start your trip anyway. However, never sit in a car in Tenerife for a long time. For example, it takes barely 40 minutes to get by car from the airport in the south (Tenerife South Airport) to Santa Cruz de Tenerife right up the north end of the island. Driving the whole round around Tenerife is unlikely to take more time than between 2.5 and 3 hours. 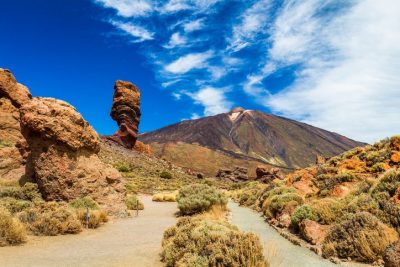 Teide – the large volcano mountain in the middle of Tenerife at a whopping 3,718 meters above sea level.

Pico del Teide – Take a trip to the top of Spain

Teide is the name of the large volcanic mountain in the middle of Tenerife. The top of the mountain is a whopping 3,718 meters above sea level, making it the highest point in Spain. Worldwide, Teide is considered the third highest volcano. The volcano is also considered active, but the last eruption was over 100 years ago (1909). Teide and the national park that surrounds the mountain are now a national park, and are a UNESCO World Heritage Site. When you are in Tenerife you should treat yourself to either the centre at the foot of the mountain, or up to the viewing platform near the top. You can go there, which will take you about 5 hours, or take the cable car. The cable car is the most popular choice, and it takes no more than 8-9 minutes up. 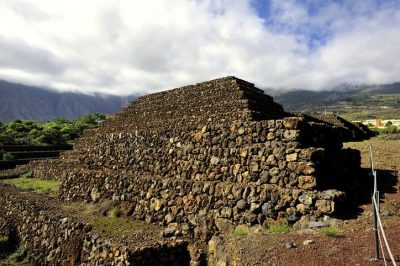 In the city of Güímar there is a collection of pyramids, built in lava stone.

In the small town of Güímar on the east coast of Tenerife, you will find a strange phenomenon when it comes to building art. In what is now considered an ethnographic park there is a collection of pyramids, built in lava stone that you can find everywhere on the volcanic island. Originally there were 9 of these pyramids, but only 6 of them remain today. There are several theories about the reason why the pyramids were built. One of them suggests that the pyramids are a random byproduct of normal activity on farms in the area, while another suggests that the phenomenon is linked to similar phenomena you find in, among others, Sicily,in Mexico and in Peru. Whatever the truth, Pirámides de Güímar is worth a visit when you’re in Tenerife. In the park you will also find a museum,an auditorium and some lovely botanical gardens to stroll in.

Siam Park is a 10-minute water park located on the Costa Adeje on the southern tip of Tenerife. The park is one of the most elaborate in Europe, and was inaugurated by the princess of Thailand herself. Siam is known as the old name of Thailand. Besides endless opportunities to swim, there are around 15 different attractions in the park. Some of them are meant for children, while others are suitable to give you a little adrenaline kick. As expected, the entire park theme is related to Thailand. In total, there are 25 buildings here, most of which are restaurants and cafes, which are replicas of typical houses you will find in ancient Siam. The water park is open all year round, making it the perfect place to cool down when the Atlantic Ocean and the beaches of Tenerife do not tempt.

Candelaria – An important part of the history of the Canary Islands

The small town of Candelaria is located on the island’s east coast, just south of Santa Cruz de Tenerife. The city is primarily a religious center for the whole island. In candelarias basilica there is a Madonna figure who is a stop over on the pilgrimage that runs all over Tenerife, and the city is the site of an annual fiesta in this context. The Madonna figure is said to have been found by Guanchefolk. These were the island’s urns living in Tenerife when Spanish conquistadors took over the Canary Islands in the 15th century. The conquistadors interpreted the figure that it represented the madonna and they built a small hermitage to place the figure in. The Hermitage was later converted into the basilica that stands there today. Candelaria is a popular small fishing village among those who visit Tenerife also for its excellent restaurants. The surrounding area is also a great terrain to walk in. You will, among other things, pass several prehistoric caves where the urns buried and mummified their deceased. 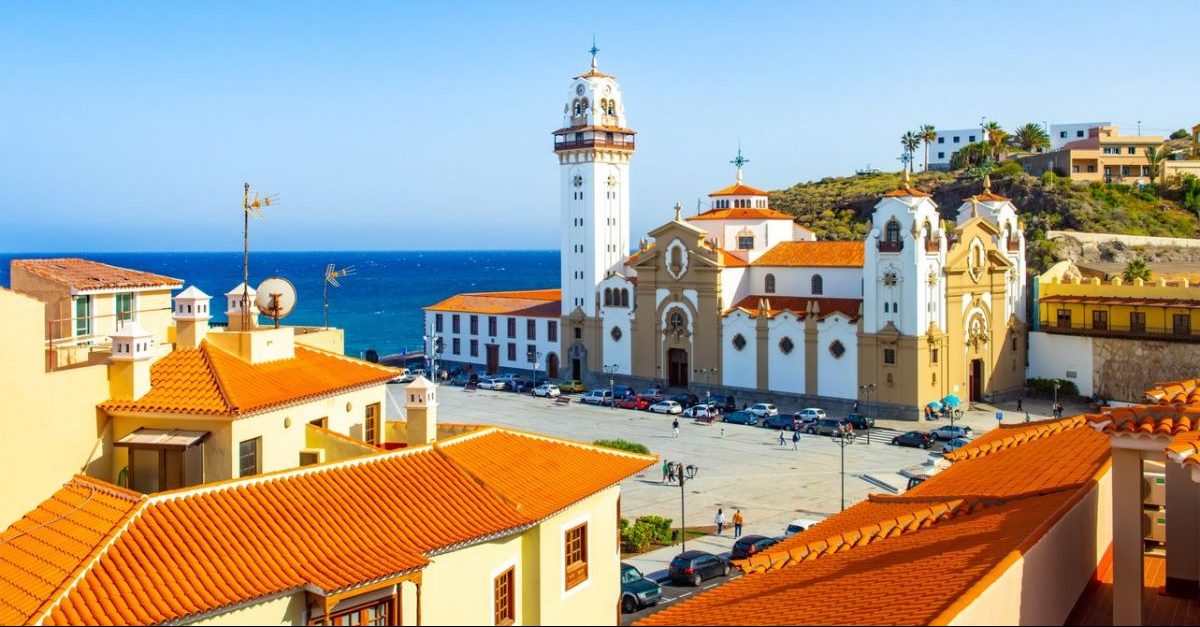 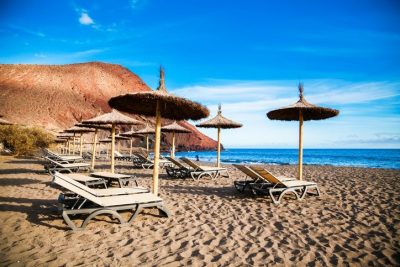 The sand at Tejita is mixed volcanic ash.

These two beaches are considered among the best in Tenerife, and are close to each other. The beaches are separated by a headland where La Montaña Roja is located, a small volcanic mountain top that is one of the island’s tourist attractions. Tejita Beach is the place to settle on if you want to swim and sunbathe in beautiful surroundings. The sand here is mixed volcanic ash, and is soft and comfortable. El Médano Beach is popular with those who like to stay active when they are at the water’s edge. Here too there is soft and pleasant sand, but the beach has more waves and wind than Tejita. That’s why you’ll see a lot of spreads like windsurfer and kiting at El Médano. The name is by the way, the same as the fishing village the beach is located by. There you will find a pleasant atmosphere and many good eateries.

In the cities of Tenerife, you can park for free in the streets in most places, but usually only in marked places. Yellow lines and white lines mean you will be fined if you leave your car there. In the worst case, the car is towed away. Blue lines mean there is timed parking and you have to pay a fee.

The best solution in cities is normally to use the parking facilities, or the parking spaces associated with the hotels. You have to pay the fee, but in Tenerife the prices for parking are low compared to most of Europe.

Driving in the small towns and towns of Tenerife is easy, and there are usually not long queues there. Outside the cities, the roads are generally in good condition. There is a motorway from Las Machas on the island’s west side, down to the island’s southern tip, and all the way up to Santa Cruz de Tenerife on the island’s north side. From there there, there is a highway up to the island’s north side, and further along the coast to Los Realejos. It is mostly only when you are going outside the main thoroughfares and into towns and cities, that you have to drive the somewhat inferior country roads.

Remember that in Spain, including in the Canary Islands, you can be fined for driving with naked torso (and lower body). Even if it’s hot and you’ve just come from the beach, put on your shirt or the like! You should also avoid taking action that may distract you while driving. For example, you may be fined if you eat or drink while the engine is running. 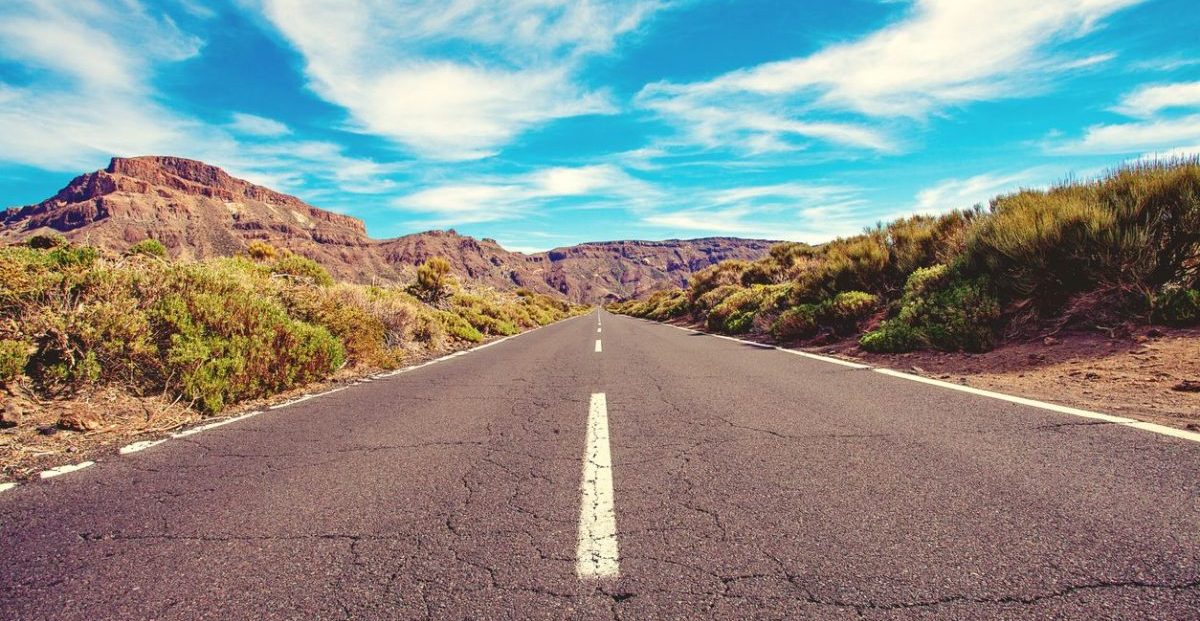 Driving in the small towns and towns of Tenerife is easy, and there are usually not long queues there. Outside the cities, the roads are generally in good condition.

There are two airports in Tenerife that handle international flights. The largest is located on the island’s south coast, and is therefore called Tenerife South Airport, or Aeropuerto de Tenerife Sur in Spanish. The name Reina Sofía Airport is also used locally. Here, approximately 11 million passengers a year are served. The airport is thus the second largest in the Canary Islands, after Gran Canaria Airport. There are scheduled flights here all year round from most major cities in Europe. In addition, there is extra high traffic during the busiest seasons, especially charter flights.

The smallest, Tenerife North Airport,is naturally located on the northern part of the island, and right next to the town of San Cristóbal de La Laguna. Approximately 3.7 million passengers are served annually. From this airport there are flights internally between the Canary Islands, and to a number of Spanish and European cities.

The largest airport in Tenerife is located on the south coast and is therefore called Tenerife South Airport.

At Tenerife South Airport, car rental companies have two areas. Some have their counters on the ground floor in the arrivals hall, and some have their desks in the concourse on the floor above. The companies are currently Hertz, Europcar, Sixt, Goldcar, Interrent, TopCar, Cicar and Auto Reisen. The rental cars are all parked in a dedicated area, close to the terminal building.

This airport is small and clear, and you will find all the counters of the car hire companies in the arrivals hall. As of today, Cicar, Auto Reisen, Europcar, Goldcar, Budget, Hertz and Avis are available at Tenerife North Airport.