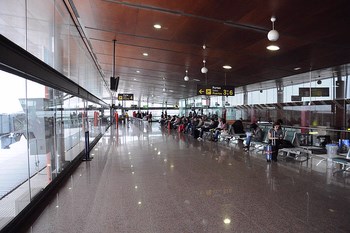 Vigo Airport (VGO) is located in northwest Spain – 8 km east of Vigo center – and just 25 km from the border to neighboring Portugal.

The airport is also known as Vigo Peinador Airport, and is called in Spanish “Aeropuerto de Vigo”.

7 airlines have direct flights from Vigo Airport for both domestic and international destinations – including to Madrid, Barcelona, Paris, London, Bilbao and Tenerife.

To get from the airport into the center of Vigo, one can take a bus or taxi. If you choose to take a taxi, these are lined up outside the arrival hall of the airport.

It is popular to rent a car in Spain, and at the airport’s branches to several well known car rental companies – including Avis, Europcar and National.