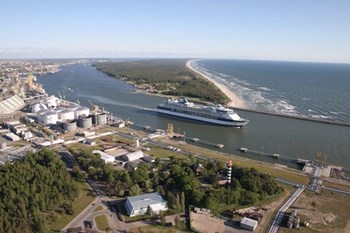 Klaipėda (German: Memel or Memelburg) is Lithuania’s only seaport. Klaipeda on the Baltic Sea west of the country – specifically at the mouth of the Nemunas River. The city was formerly German. Home to just under 200,000 people in Klaipeda, the port is a ferry connection to the Sweden, Denmark and Germany.Near the city are the two popular seaside resorts Nida Palanga.

In Klaipeda there are a number of timber-frame buildings, as in Denmark and Germany. It is in all German dominated architecture that dominates the city’s old quarters, which otherwise consists of narrow, quaint streets and alleyways. Much of Klaipeda’s historic architecture is preserved, making it a tourist attraction in itself.

Among the sights otherwise we Historical Museum (built in 1924) documenting both Klaipeda and Lithuania’s history. Mention must also Lithuania Maritime Museum – which includes several units – including a general maritime museum, an aquarium and a dolphinarium.