Compare prices and find cheap car hire in Toulon from well-known and local car hire companies. Insurances and unlimited mileage are included. Save up to 70% on car rental in Toulon through us. 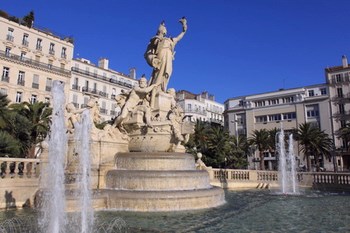 Toulon is located on the Mediterranean Sea, more specifically in the Provence-Alpes-Côte d’Azur region, where it is the capital of the Var department. The distance northwest to the metropolis of Marseilles is 65 km. There are around 162,000 inhabitants living in Toulon itself (2010), but if you count on the suburbs as well as the neighbouring town of Hyères, the population rises to over half a million.

In Toulon, France’s very first naval base was built, and the city still has an important defensive political significance as the main station for the French Mediterranean fleet. The town also has its own naval academy – and is otherwise characterized by a varied industrial activity. The proximity to the popular resorts along the French Riviera makes the tourist flow to the city relatively large.

Large parts of Toulon were destroyed during world war two. World War II, but part of the Old Town is still preserved. Here you can feel relegated to the Middle Ages when walking in the narrow streets. A distinctive feature of the old town is the many beautiful fountain, the oldest from 1668. Also the beautiful Notre Dame Cathedral (or Toulon Cathedral) is located here. It was begun in the 12th century, but not completed until the 19th century. 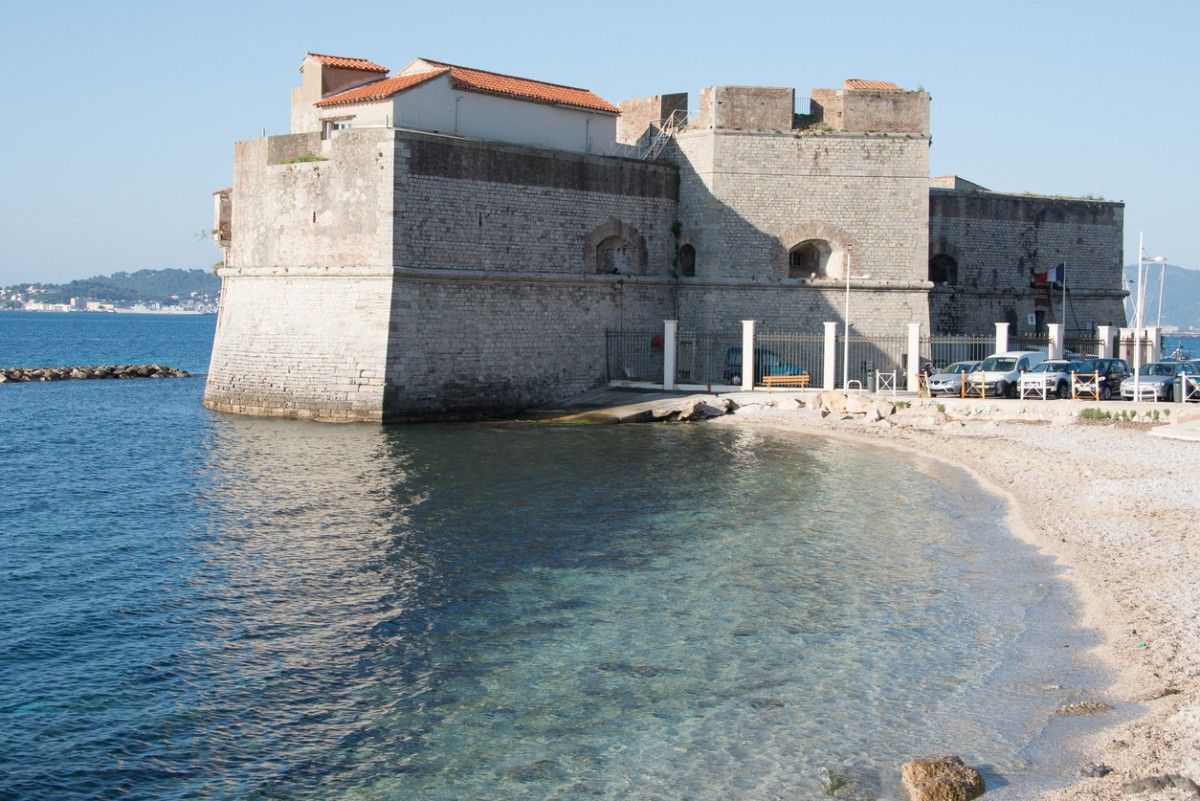 The rest of the city centre is characterized by modern postwar architecture. A number of older fortifications are located at the heights of the city, although there are also some monumental 19th-century buildings in the borough often called “Baron von Haussmann” (named after one of modern Toulon’s “fathers”).

Toulon also boasts several interesting museums – including the 2016 World Visit. a naval museum, a couple of historical museums and an art museum.

Toulon is a good starting point for exploring Provence and the French Riviera by car. One of the advantages is that there are fewer people flying here compared to Marseille and Nice, in addition to the fact that the city is very centrally located. You can take short drives to a number of beautiful villages, and also don’t have as long way if you want to to, for example, Nice and Monaco. Here are some suggestions for the most popular rides from Toulon. 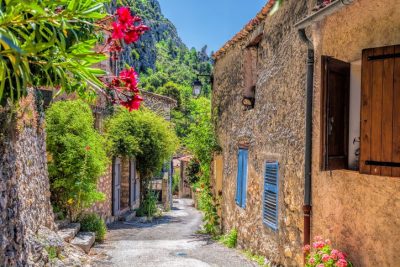 Moustiers is on the unofficial list of the most picturesque villages in France.

Moustiers is on the unofficial list of the most picturesque villages in France. It is located at the entrance to the Gorges du Verdon, which is famous a riverbed and a gorge considered among Europe’s most beautiful of its kind. The village is especially known for its pottery traditions. There is a small stream of high fall through the center, giving the potters the energy they needed to power small mills. The settlement in Moustiers is mostly from the Middle Ages. The houses are located on plateaus along the rock face, and appear particularly beautiful in the sunset. Pottery is still part of everyday life in the village, and you will find several small craft shops that both stock and sell their goods. There is also a pottery museum in Moustiers that is worth taking a look at.

Rayol-Canadel-sur-Mer is a small municipality with two small villages close to each other, not too far from the more famous St. Tropez. Besides being a quiet area with a relaxing atmosphere, the villages are famous for their many and beautiful gardens. The largest garden is the municipality’s own botanical garden. There, trees and plants are grown from all over the Mediterranean, and from places such as California, Australia,Africa and South America. Both villages have their own beach, where it is rarely crowded with tourists. The same goes for the few but good restaurants you will find in both villages. If you want to experience a slightly less hideous part of the Riviera, this area is to stop by.

Les Baux-de-Provence is also among the most beautiful mountain villages in Provence. It is located on a rocky hill in the small mountain range called Alpilles. The village itself consists of beautiful medieval small houses. The vast majority of the buildings have been restored, and appear much like they did when they were built centuries ago. The largest building stock in Les Baux is a ruins of a fortress located on the top peak. From there, the view is best, and if the weather permits you look all the way to the MediterraneanSea. You see the larger cities of Avignon, Nimes and Arles from here. Tourism is the most important industry in Les Baux-de-Provence, and there are over 1.5 million visitors here a year. There are many good eateries in the small town, where the menus are characterized by delicacies from the farms in the area.

The mountain village of Les Baux-de-Provence is located on a hill in the small Alpilles mountain range. 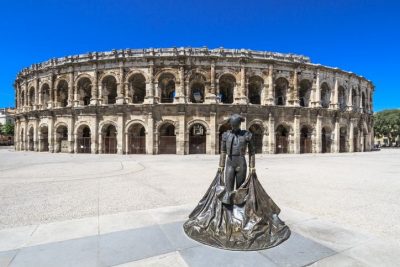 Arles was a central city in the Roman Empire that traces today, such as the Roman Theatre.

Arles – The Artist City of Provence

Arles is one of the most historically important cities in Provence. It was probably first established about 800 years f.Kr,and later became a central city in the Roman Empire. You’ll see traces of this still. Among other things, there are ruins in the city from a Roman amphitheatre, a Roman bath, a couple of aqueducts and a water mill, as well as associated buildings. In more modern times, Arles is known as a place where great artists enjoyed staying– including Dutch painter Vincent van Gogh,and van Gogh’s French artist friend Paul Gaugin. In Arles you will find a relaxing atmosphere, many pleasant eateries, and more sights than you can catch up with, unless you settle here permanently. 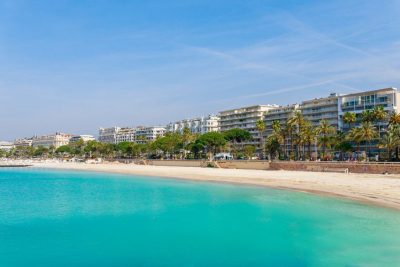 In Cannes you will find some of the Riviera’s finest beaches with golden sand and azurblue sea.

Cannes and Nice – Glamour on the French Riviera

If you get enough of small, picturesque villages when exploring Provence, perhaps Cannes and Nice are the right medicine. The two iconic cities are relatively close together and are easily reached by rental car from Toulon. Cannes is the smallest city, known among other things for its major film festival. There you encounter a vibrant and urban city life,while at the same time having some of the riviera’s finest beaches to address. In Nice you will find even more metropolitan touch. Here people travel to shop, go to bars and nightclubs,dine at exclusive restaurants, and visit the city’s many museums and galleries. Although the beaches of Nice are more rocky than in Cannes, it is nice to swim and sunbathe here too. 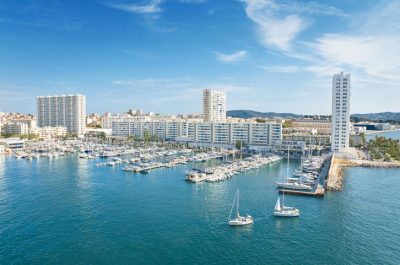 There is the most dense traffic in the port area where there are ferries to Sardinia and Corsica.

In Toulon, it is normally not difficult to find parking space in the streets of marked places. Keep an eye on the signs, as many areas have special restrictions. Typically, you pay a fee between 07:00 and 19:00 on weekdays. In some places you will have to pay a 24-hour fee, but then with a reduced price after 19:00 until 07:00. There are also a few parking facilities in the city centre you can use, as well as the garages of some of the largest hotels.

Driving in Toulon and the surrounding area usually does not present any problems. The roads are good, and the streets are right and nice in most places, with the exception of Toulon’s old town. The densest traffic is usually in and near the port where the ferries go to Corsica and Sardinia. Traffic in the city, and otherwise on the Mediterranean coast of France, is also significantly denser in the summer, and especially when there is vacation time in the country.

The official name of the airport in Toulon is Toulon-Hyères Airport, but locally it is also referred to as Hyères Le Palyvestre Airport. The airport is located almost 20 kilometers from Toulon, and just outside the smaller town of Hyères in the direction of Nice and Cannes. Most people going to southern France and Provence have arrival and departure from either the airport in Nice, or in Marseilles. A small selection of airlines use Toulon-Hyères, preferentially flying domestically with Air France, Transavia or TUI. In addition, some charter flights arrive at this airport.

The companies offering car rental at Toulon-Hyères Airport are gathered in a separate area right next to the car park (P3). As of today, you can get car hire from Hertz, Thrifty, Avis, Budget, Europcar, Enterprise, Sixt and Virtuo at the airport outside Toulon.