Compare prices and find cheap car hire in Zadar from well-known and local car hire companies. Insurances and unlimited mileage are included. Save up to 70% on car rentals in Zadar through us. 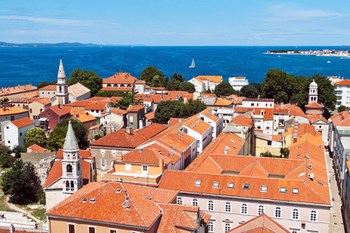 The port city of Zadar is located in southwest Croatia on the Adriatic Sea – in the dalmatian landscape – and has 75,000 inhabitants (2011).
Zadar is the economic and cultural center of North Dalmatia, and is also a major industrial and tourist town. From the port there are ferries to, among others, Split and Rijeka.

Zadar is famous for its production of the cherry liqueur “Maraschino”, but is perhaps most famous for its many monuments from roman times. The town also has many ancient churches and palaces from the Middle Ages.

A major tourist attraction in Zadar is the 10th-century Church of Saint Donato, which is now an archaeological museum. St. Donato Church was built on an ancient Roman forum, and many of the stones inside the church date from this time. In front of the church there are remains of the Roman forum from the year 100 bc. Kr.

The 10th-century Saint Donato Church is now an archaeological museum.

Other popular sights in the city include 13th-century St. Anastasia Cathedral and the 12th-century St. Mary’s Basilica with its distinctive bell tower.

Zadar has otherwise good swimming opportunities as well as a great sea-promenade, and the archipelago “Kornati” is a popular excursion spot for tourists. Here you will find 89 islands and islets.

Zadar was voted Europe’s best resort in 2016, but for most people it is enough with a couple-three day stay in the relatively small town. Therefore, the city is a popular starting point for excursions by car rental to other exciting places and cities in the area. Here are some suggestions and tips for rides that don’t require long transport stages and offer unique experiences. 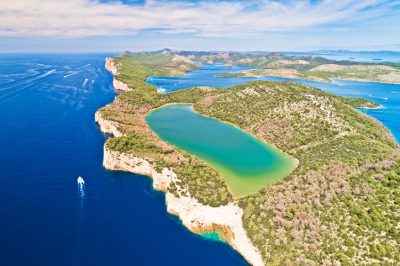 The island has little tourists and a lot of unspoiled nature.

Dugi Otok means short and well “the long island”. It is located just outside Zadar and is known for its pristine scenery,beautiful beaches, olive and fig trees, not to mention silence and tranquility. There are not many tourists travelling to Dugi Otok, partly due to a lack of fresh water here. This in turn has meant that the hotel and tourist industry has stayed away from Dugi Otok, and instead focused on islands such as Krk, Hvar and Brač. For those who want peace and quiet, and the beautiful beaches and pleasant villages for themselves, this is only an advantage. Those who travel to Dugi Otok are precisely those who are looking for something more authentic and peaceful. 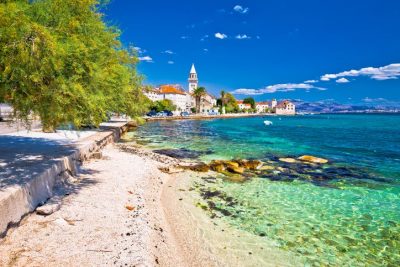 In Split you can combine historical sights with sun and bathing life.

Split – The Best Summer City in the Adriatic

Split is the second largest city in Croatia,and perhaps the most livate and exciting city on the Adriatic coast. Its central location has made the city a commercial hub for centuries, and which residents have benefited from purely economically. This is reflected in the city’s beautiful and impressive buildings,especially those you will find in the old town of Split. The most famous is the palace which was built as the residence of the Roman emperor Diocletian in the year 305. The palace is one of several structures in the city that stand on UNESCO World Heritage List. Besides visiting beautiful buildings, museums, monuments and other sights, Split is a city where people go to shop, eat delicious Seafood at good restaurants,to bathe and sunbathe, and to participate in the city’s vibrant nightlife.

Mostar is one of neighbouring Bosnia and Herzegovina’s most beautiful cities, and is simply reached from Zadar if you have a rental car. The drive to Mostar also takes you past some of the best seaside resorts in Croatia, and the trip can be combined with several stops along the way. In Mostar you will find a beautiful center with medieval houses,lying on both sides of the River Neretva. The city’s main attraction is the Stari Most bridge,from which the city has its name. The bridge and a number of other buildings were completely damaged during the war in the Balkans in the 1990s, but thankfully restored again a few years later. Most streets are closed to traffic– and coated with stones in a pattern that make it all look like pieces of art. There are many tourists in Mostar in the summer, which the shops and restaurants bear a little touch of. Nevertheless, this is a city worth the visit. The inhabitants are friendly and helpful, Mostar is located in a beautiful landscape and you will experience a nice contrast to the more modern Croatia. 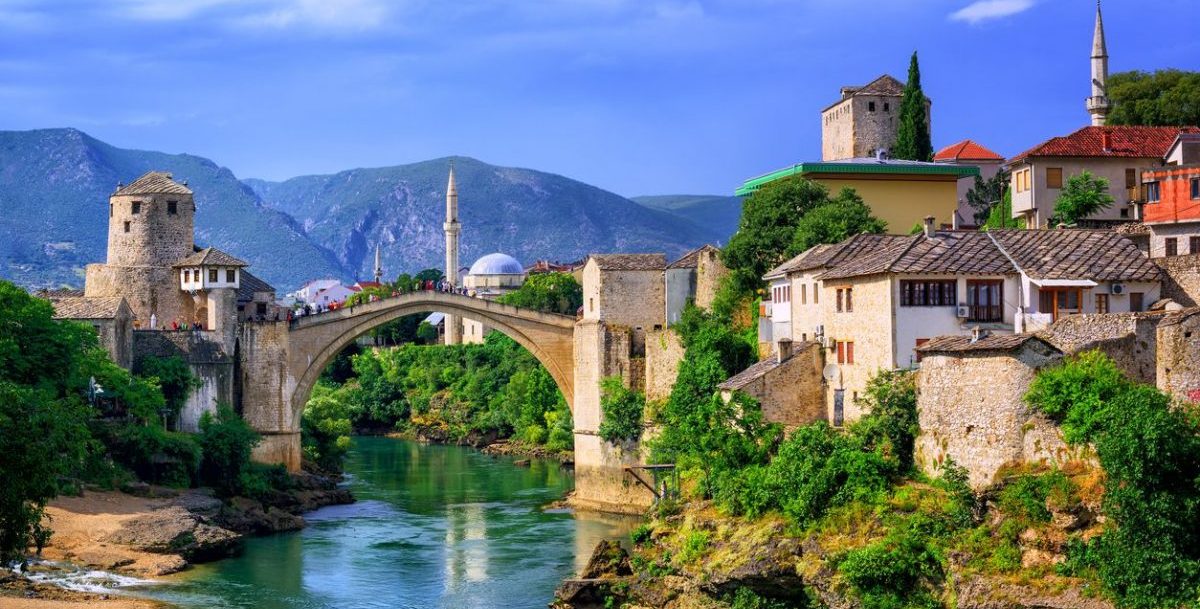 The most famous attraction is the Stari Most Bridge across the Neretva River in Mostar’s Old Town. 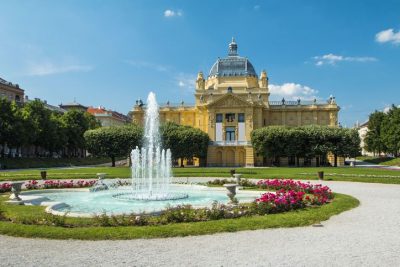 Kunstpavilliongen is an art gallery for contemporary art in Zagreb.

Zagreb – The capital of Croatia

Most tourists who travel to Croatia, seek their way to the coast and the many and beautiful summer towns located there. The capital Zagreb is therefore often overlooked, despite the fact that the city is beautiful, rich in history, and is considered one of the most friendly and accommodating in Europe. If you are on holiday on the coast and want to experience something different and more cosmopolitan, treat yourself to Zagreb. Zadar is no further away than that you can take a day trip, but Zagreb deserves an overnight stay or two if you have enough time. At a minimum, you should stop by the historic centre of the city,as it is where many of the finest buildings and sights are located. Also consider visiting some of the many exciting museums and art galleries in the city. Zagreb is also a good place if shopping is on the wish list, and the city is famous for accommodate many good restaurants. If you are in Croatia in the pre-Christmas period, treat yourself to a visit to Zagreb’s Christmas Market. It has been voted the best in Europe three years in a row (2016, 2017 and 2018). 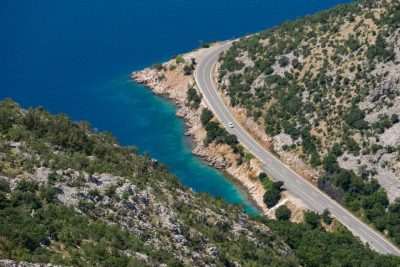 The roads along the kystein can be very hilly with many twisting turns.

There are several large parking spaces close to the old town of Zadar where it is reasonable to put away the car. There is also street parking in the city centre,with different sizes of the parking fee in relation to the zone in question. Please note that parking rates are usually slightly higher in summer than in the rest of the year, but there are still relatively reasonable fees in Croatia.

Driving in the relatively small town of Zadar is normally completely hassle-free and it is easy to find your way. The exception is the old town which is closed to car traffic. When you go on day trips or continue by car rental to other places in Croatia, you can get out of the center of Zadar in about 5 minutes. The roads elsewhere in Croatia can be described as consistently good, but traffic can at the same time be perceived as something intense here and there. Many drivers drive faster than they allow speed limits, despite the fact that the speed limits in Croatia are quite high. Pay special attention to small roads along the coast. These can be very hilly, and with many twisting turns.

Zadar Airport is called Zračna luka Zadar in Croatian, and is located just east of the center of the city. Although it is the country’s fourth largest airport, it serves no more than about 800,000 passengers a year. Many of these are summer tourists exploring Croatia’s beautiful coastal strip. Therefore, this has become one of the most important destinations of, among others, the low-cost airline Ryanair. You can also fly directly to Zadar with a number of other European airlines, but the vast majority have routes that only run during the tourist season. 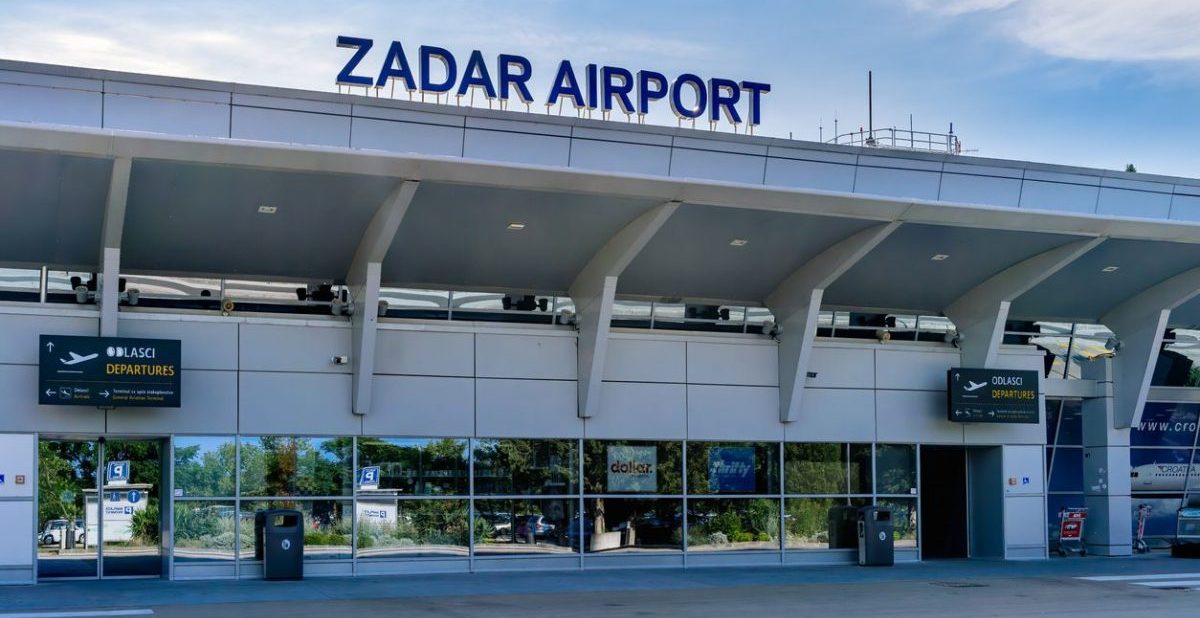 Zadar Airport is located just east of the center of Zadar.