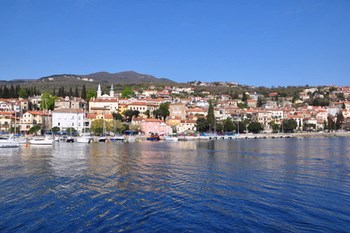 Rijeka is located northwest of Croatia the Adriatic coast, and has approximately 140,000 inhabitants (2008).If it is estimated metropolitan area, the population is increasing to almost 300,000. The city is situated in Kvarner Bay east of Istra peninsula, and is the country’s main port. Rijeka has a major naval base here, and ship owners and shipyards.

Rijeka is the administrative center of the county Primorje-Gorski Kotar, and the city has its own university – which was founded in 1632. From the port for ferries to such  Zadar, Split, Dubrovnik, Bari ( Italy ) and to Greece and Albania.

The old town of Rijeka is picturesque with its narrow streets and baroque buildings. There are also many cultural and historical monuments.

Among the most famous tourist attractions in Rijeka, may the great St. Vitus Cathedral mentioned. This Baroque church from the 1600’s, and is the terminus for the pilgrims from all over the world who come to see the painting “Marija of Trsat”.

On a hill above the harbor is Trsat fortress and Franciscan monastery from the 1200s, which is also a major attraction. 561 steps lead up to the castle from the town center.

Rijeka is otherwise a great variety of theaters and museums – including a municipal museum, maritime museum and a natural history museum.

There are good swimming conditions in Rijeka, especially at tourist resort Opatija, located near the city.