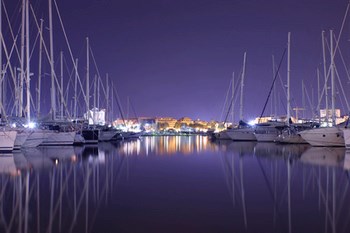 The port city Denia is located in southeast Spain on the Costa Blanca on the Mediterranean Sea and belongs province of Alicante.Denia has about 45,000 inhabitants (2011), and a swim-and resort town with great tourist traffic. Denia is famous for its wonderful sandy beaches that stretch for miles along the coast.

From the port of Denia there is a ferry connection to such the famous holiday islands of Ibiza and Majorca.

Denia has many golf courses, and there are good possibilities for excursions to the major cities of Valencia (105 km northwest of Denia) or Alicante (105 km southwest of Denia).In addition, the popular beach and resort town Xabia near Denia.

One of the biggest tourist attractions of Denia’s castle “Castillo” from the 1100s, located on a hill – with great views over the city and sea. Within the castle walls you can visit the Museum of Ethnology – focusing on the city’s cultural history and an archaeological museum.

The city hosts several annual festivals – including one “fire festival” in March.

The nearest airport is Alicante Airport, which is located 104 km southwest of Denia.