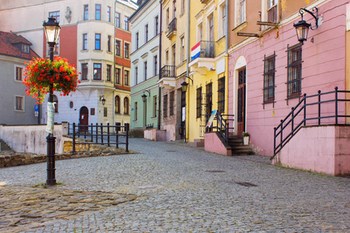 Lublin is about. 160 km south of Poland’s capital, Warsaw, and has approximately 350,000 inhabitants (2008).The city is also a center of commerce and education, and the famous Marie Curie University is here.

The city of Lublin was first mentioned in the 1200s – and had its heyday in the 1500s, because of its strategic location between Krakow (Poland’s former capital) and Vilnius (capital of Lithuania ).It had then a multi-cultural character, and was an important center for both Judaism and the Christian reformation movement. Under 2 World War II was one of the worst Nazi concentration camps – Majdanek – built right by the city. During the war, the Jewish population of Lublin reduced from over 42,000 to around 4,500 – an unimaginable tragedy.

Many of Lublin’s most important sights are within walking distance of each other in the city center. This includes the old Lublin Castle Medieval (restored in the 1800s) and the Holy Trinity chapel from the 1300s. In the chapel there is the unique Byzantine wall paintings from the early 1400s, and some newer artwork. Close by the city’s Old Town Square, where they have uncovered the foundations of an old 1300-century church (St. Michael’s Church). There are also a number of interesting churches in Lublin.

The historic center is otherwise more of the old city gates preserved and wonderfully – and they serve as a symbol of Lublin.

Among the city’s many museums and monuments are more linked to 2nd World War. It applies primarily to Majdanek, which documents the concentration camp atrocities – but also the Gestapo Museum (also known as Martyr Museum).

Lublin is designated as European Capital of Culture in 2016, and prior to that the marketing of a number of planned events leave their mark on the cityscape.

Lublin is also a shopping town, where one of the historic city center will find many small specialty shops selling souvenirs and local specialties. In addition, it may be mentioned that in the outskirts of town are several large shopping malls.

Lublin is situated between two international airports: Warsaw Airport is about. 160 km northwest of the city, while Rzeszow Airport is a similar distance south of Lublin