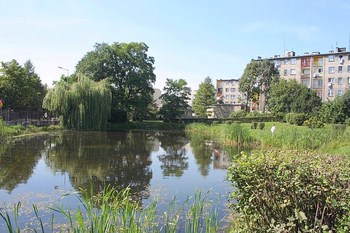 Olkusz is a town in southern Poland not far from the border with the Czech Republic and Slovakia, about 30 miles northwest of Krakow. It has 37,552 inhabitants (2006) and is the main city in the region Olkusz.

The first written document referring to the town is from 1299. The town was originally controlled by citizens of German descent, and residents were mostly wealthy because of blygruver area. Also silver is found here.

The city lies on the River Baba next Krakowsko-Częstochowska Highlands. About 40 miles west of town is the city of Czestochowa frequented by around five million tourists and pilgrims every year. Pilgrim is the Black Madonna of Częstochowa, also called the Black Maria, kept in Jasna Góra Monastery in the town and perform many miracles.

Close to Krakow, one of Poland’s most visited cities, is also central Olkusz.

One of the most famous images in the world that are used as illustrations of the Holocaust atrocities by Rabbi Moshe Dayan the Hagerman, a judge in Olkusz, being made fun of and abused by German soldiers. The image was later identified by people who survived the war and dated to 31 in July 1940, also called “blood Wednesday in Olkusz»