Compare prices and find cheap car hire in Stavanger from well-known and local car hire companies. Insurances and unlimited mileage are included. Save up to 70% on car rental in Stavanger through us.

Stavanger is the fourth largest city in Norway, with approximately 135 000 inhabitants. The city and the area have played an important role in older Norwegian history, especially during the Viking Age. Since 1969, Stavanger has developed into the oil capital of Norway. Here the largest international and Norwegian oil companies have offices, together with several state institutions connected to the oil industry.

The city also has a university, and the students leave a strong mark on the nightlife in Stavanger. There are a number of exciting and popular festivals held here, and virtually all year round.

In Stavanger you will find a high number of museums, galleries, concert venues and other cultural institutions. The city was chosen as european capital of culture in 2018.

The restaurant offering and nightlife in Stavanger are undoubtedly among the best in Norway. Together with all the concerts and festivals, this makes it always popular and livat in the city centre.

Next to the nightlife and cultural institutions, it is nature that is the main attraction in this area of Norway. It is a short distance from the city center to some of the most beautiful and best beaches you will find in Norway. The climate in the region, and the fact that it is shallow in many places, allows the bathing temperature to be very pleasant in summer.

It is also a short distance to beautiful fjords and islands when you are in Stavanger. Among other things, the Lysefjord, with the famous preikestolen and Kjerag celebrities, is just a short car or boat ride away.

Many believe that Stavanger is Norway’s best city to live in or visit, and especially in the summer. It is due not only to the city’s strong economy, and hence the culture and everything that happens in the center, but also the beautiful surroundings. In this part of Norway there are unique nature experiences close-in-the-tight. Well-known sights such as Preiekestolen and Kjerag are just a short drive away by car rental, the picturesque southern villages are within easy reach, and you can experience some of the most beautiful fjords and mountains Norway have to offer. Here are some suggestions for trips with Stavanger as a starting point. 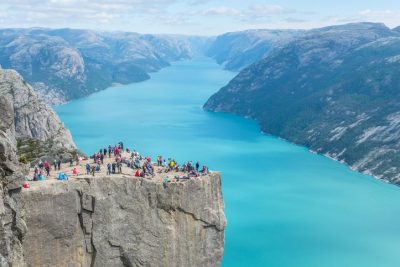 At the top of Pulpit Rock you get a wonderful view of the Lysefjord.

Preikestolen is located some distance inside the Lysefjord,where you also have Lysebotn and Kjerag at the very end. The unique rock formation is also well known outside Norwegian borders. A few years ago, Pulpit Rock was the scene of a scene in one of the Mission Impossible films starring Tom Cruise. Unlike Cruise, you don’t have to climb the massive and steep rock face, but can instead walk. At the top you will get a view of one of Norway’s most beautiful landscapes.

Please note that you cannot drive all the way. The car leaves you in the parking lot of Preikestolhytta, and from there you will continue on marked trails. The hike on foot takes about 2 hours each way (the distance is 3.8 kilometers, with a elevation of about 330 meters). Remember to put on suitable clothes and shoes and get into it in advance. There are several places on the route that are suitable for a rest break, and you will find good swimming opportunities on the way to Preikestolen.

Obrestad Lighthouse – Take a night as a lighthouse keeper

Visiting old lighthouses is popular all over the world, even at Norway’s southern end. There are a number of those that have been very important for ship traffic and trade along the Norwegian coast. The sea outside can be whimsical, and there are many unfortunate souls who have wrecked in the North Sea. Obrestad Lighthouse is a natural choice if you visit one of the unique lighthouse houses. It was built in granite in 1873,while a lighthouse master’s residence and lighthouse-serviced residence came to a few years later. The lighthouse house and its surrounding dwellings are beautifully located in the countryside, on a small elevation right by the sea. You can stay at Obrestad Fyr if you book in advance, which has become popular at several lighthouses along the coast of Norway.

Obrestad lighthouse and its surrounding dwellings are beautifully located in the countryside, on a small elevation right by the sea. 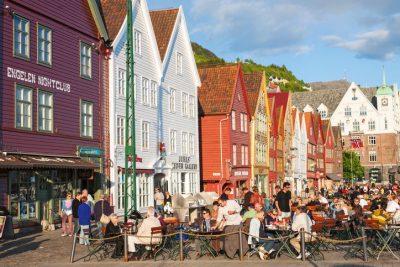 The pier in the old Hansabyen Bergen.

Bergen – The city between the seven mountains

The old Hansabyen Bergen is the second largest in Norway, with approximately 285 000 inhabitants. The city itself is worth a visit if you are in Stavanger and want to see more of the Norwegian west coast. Large parts of Bergen city centre are beautiful, with the well-known Bryggen as the largest draw plaster. Here you will find some of the country’s most famous sights, many good eateries, shopping opportunities, and cultural events and activities for people of all ages.

The surroundings of the city are also something the inhabitants can boast about. It is located between seven mountains on one side, and has the unique archipelago Øygarden on the other side, an area consisting of over 1500 islands and islets. The trip from Stavanger to Bergen by car rental is in itself a great experience. You drive along the coast in one of the most beautiful landscapes in Norway. 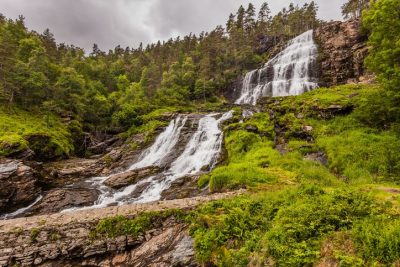 Svandalsfossen waterfall is located almost at the bottom of the Saudafjord.

Svandalsfossen – Nature and shower in the same slap

Svandalsfossen waterfall is located almost at the heart of saudafjorden,a fairly easy drive from Stavanger by car rental. The waterfall is one of the most beautiful in Norway, and is part of the National Tourist Road Ryfylke. Despite the ease of getting here, it is usually not packed with visitors. That in itself makes the nature even better. The svansalsfossen has two falls totaling 180 meters. The waterfall is clearly visible from the road as you approach Sauda, but you are strongly advised to take a closer look at it. Park your car by the highway and walk the stairs up to the vantage point, and walk under the bridge that crosses the waterfall. From the vantage point you can also see the whole fjord if there is good weather, and the villages that are located along the fjord edge. Remember to bring dry clothes and a tablecloth!

There are many beautiful and idyllic small towns along the coast of Norway, and perhaps especially in this part of the country. If you are going to select one of them to make a visit, Egersund should be on the list. The city’s location made it great in the fishing industry,and eventually Egersund became known as the place where some of the country’s largest shipowners were based. The city’s strong economy over a long period of time is something that is reflected especially in the well-maintained and preserving old town. The city centre is dominated by typical white-painted southern houses,you will find a number of good hotels and eateries there, and the city is famous for its many galleries and museums that hold high standards. Egersund is also a good starting point if you want to get active on your holiday, for example with salmon fishing, deep sea fishing,walks in forests and mountains, swimming (one of the region’s most beautiful beaches located right outside the city) and other nature experiences.

The company Stavanger Parkering operates most of the parking spaces in the city. If you want to leave your car at street level, you must use marked parking spaces. Vending machines on the pavements are charged and can use both cash and cards. If you download stavanger parkering’s payment app you can use your smartphone to pay with. The advantage of the app is that you pay only for the actual time you are parked, and you do not have to return to the car if you want to extend the time you are in the parking lot. The company has 7 indoor parking facilities in the city centre. There you will also find chargers for electric cars. By the way, there is a reduced price for payment for those who drive electric cars.

Driving a car in Norwegian cities, Stavanger included, is usually very easy. Although this city also has many one-way streets, and a few areas in the city centre that are car-free, you hardly face any problems. The signage is good, and the other drivers are usually friendly and calm. Please note that in Norway, virtually all of the required to stop for pedestrians crossing the street complies with the order. The fine for failing to do this is high.

Driving outside the cities of Norway is usually a pleasant experience there too. Most drivers drive calmly and according to the speed limits. Please note, however, that animals can get in the way, both farm animals and wild animals such as moose and deer.

The airport outside Stavanger is called international Stavanger Airport. Locally, Sola Airport is often used, as the airport is located in Sola municipality. Together with Trondheim Airport, Stavanger Airport is Norway’s third largest airport measured in the number of annual passengers (both serve approximately 4.5 million passengers a year). As of today, the airport has direct flights domestically to Oslo,Bergen, Trondheim, Sandefjord and Kristiansand. In addition, you can fly directly from Stavanger to 10 other European cities, including Amsterdam, Copenhagen, London and Gdansk.

Stavanger Airport is not particularly large, and it is easy to find the companies that offer car rental there. Currently, Sixt, Budget, Avis, Hertz and Europcar have counters and rental cars at Sola. All five are located in the building located just outside the terminal. Their rental cars are parked nearby and you won’t need transportation to get there.